ROCKINGHAM — The hot summer temperatures and the uncertainty of a football season this fall hasn’t kept two of Richmond Senior High School’s kickers off the practice field.

Trevor Moss and Mack West, both rising seniors, have stayed busy during the extended coronavirus dead period, as it approaches 115 days. Now as the dog days of summer approach, the duo is hoping to complete its high school career on the football field.

To do that, both Moss and West have attended invite-only kicking camps. Moss competed in the Kohl’s Kicking Regional Showcase in Charlotte on June 9, while West spent several days at Hammer Kicking Academy’s Top 40 Camp in Orlando, Fla.

“We’re pretty close since we’re both kickers,” West said of his connection with Moss. “We’re competing every day to make each other better, and that’s really been the case since ninth grade.

“That’s especially true about last year when we were both juniors on varsity,” he added. “Every practice was spent playing ‘horse’ or seeing how many field goals we could hit in a row. The virus has slowed things down, but we’re still competitive.”

A lot of weight rests on their senior season, as both kickers are hoping to receive college offers. Moss, who has earned two All-Sandhills Athletic Conference team selections, has received interest from numerous schools, including the Air Force Academy, Arkansas, Campbell, Charleston Southern, UNC-Charlotte, Gardner Webb and Virginia Tech.

West had several trips planned this spring and summer to visit Appalachian State, Coastal Carolina, Elon, Liberty and Western Carolina, but had to cancel them because of the virus.

Each of the past three summers, the two have battled for the various kicking positions on the Raiders’ special teams unit alongside former athletes Drew Davis, Kyle Goodwin and Victor Lucero.

At the Kohl’s Regional Showcase, Moss finished fourth in the kickoff competition.The average of his top three “big ball” scores was 102.03, just over six points from the top of the leaderboard. Of his five kickoff attempts, his best distance was 72 yards and his best hang time was 3.83 seconds.

With field goals, Moss drilled 11 of his 15 attempts from varying distances, one of four players who tied for third. Later this month, Moss will compete in the National Invitational Scholarship Camp in Gatlinburg, Tenn., another Kohl’s Kicking event.

“It feels great to be invited to all of these camps,” Moss said. “I’ve been working so hard and these camps are a pay off of that work. It’s a big deal, but I try to keep composure, which is the life of a kicker.

“The competition with the other kickers always makes me better,” he added. “I like to compete, and where I am now, I feel good about my kicking skills. When I go to Tennessee this weekend, I hope to place in the top 10.” 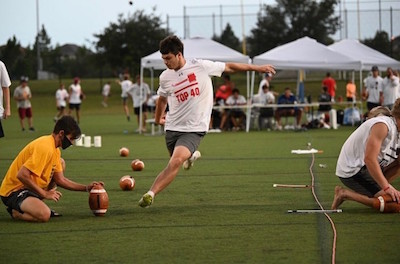 West’s trip to Florida from June 24-28 saw him compete alongside 39 of the other top kickers in the nation. Hammer Kicking Academy’s annual “Top 40” event, put on by Adam Tanalski since 2008, hosts a group of 10 freshmen, 10 sophomores and 20 juniors, the latter of which West was a part of.

Held at Dr. Phillips High School in Orlando, West participated in six sessions of instruction and charting, individualized recruiting skills, as well as recruiting seminars. Another key element of the camp is helping college hopefuls gain exposure at the next level.

“We had two or three sessions a day that lasted about an hour and a half each,” West explained. “I participated in the field goal, punts and kickoff competitions. We charted field goals and punts, which means they measured our hang time and distance to calculate an average.

“With field goals, we had six different distances, starting at 30 yards,” he added. “We kicked from both hash marks and moved back. Again, they scored our kicks based on accuracy, the rotation and height of the ball, as well as the location between the goal posts.”

On hand to help were roughly two dozen current college kickers, as well as a handful of former NFL kickers. West also learned about a new kicking tee that was approved for high school ball, which allows for more lean on the ball and “a bigger sweet spot.”

Despite not being able to practice with their Raider teammates and kicking coach Chris Larsen, both Moss and West have stayed true to their preparation on their own time. Moss heads out to the field four to five days a week and kicks, posting most of his workouts on Twitter for recruiting purposes.

West, on the other hand, has found a groove with fellow Raider athletes Carson Jordan, Bradford Pittman and Alex Yates. Along with Pittman and Yates, West is also a member of the Richmond tennis team that saw its season cut short after three matches this spring.

“Ever since school got out, me and some of my buddies have been getting together to lift weights and condition every Monday, Wednesday and Friday,” West said. “We try to treat it like normal and we went 15 weeks straight without missing a workout until we took vacations.”

As far as staying sharp with his kicking, West and his younger brother Billy, a rising eighth grader at Hamlet Middle School and also a kicker, have been going to a local field “three or four times a week” to split the uprights.

With Gov. Roy Cooper yet to announce when, and if, student-athletes across the state will have a fall sports season, Moss and West are remaining hopeful, although both have considered the thought of having their senior season taken out from beneath their plant foot.

“Yeah, it would definitely suck not to play our senior season,” West said. “Everyone always looks forward to his senior year, and I know we’re no different.”

“I’d like to play, but if there is a season or not, I think I’ll be okay,” Moss closed. “Not having a senior season will be upsetting, but I’ll keep posting to my Twitter and hopefully get recruited.”

Calling all Alumni: Post 49 to honor past players, coaches