ROCKINGHAM — When Dale Denson took over as the commissioner of the Richmond County Men’s Church Softball League in 1985, his primary objective was to intertwine fellowship and fun on the softball field.

And as he wrapped up his 35th year at the helm this week, Denson said this season was “one of the best” in recent memory and did exactly that.

Two league champions were crowned Monday following the title games, as this year’s tournament followed an “A” and “B” bracket. This was the first year that format was used, and Denson added it gave more teams a chance to win.

In the “B” bracket title game, Cheraw First Baptist Church, one of two out-of-county churches in the league, defeated Faith Missionary Baptist Church (Rockingham). Cheraw was coached by Jim Kennedy. 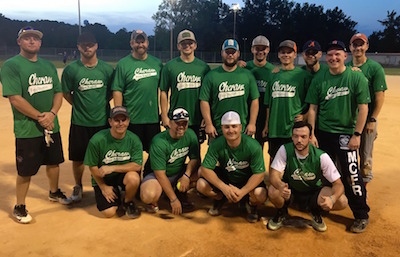 Cheraw Baptist Church, winner of the “B” bracket championship. Contributed by Brad Denson.

“Everything went really well this season,” Denson, who also played for Freedom Baptist Church (Rockingham), said. “We had Cheraw and Lilesville Baptist Church play, the first time we’ve had two out-of-county teams play. All the games went smooth and everyone seemed to have a good time.”

A total of eight teams played this season, with the regular season following a round-robin format. When the playoffs started, the top four teams made up the “A” bracket, while the bottom four teams combined for the “B” bracket.

Denson explained that some new rule changes this year contributed to the flow of play, including capping innings at six runs (except for the final inning) and allowing teams to play up to 12 players in the field.

All games were played on the front field at East Rockingham Park, and the league saw only one rain out all season. Denson was adamant about the help of several individuals in helping make the 2019 season a success.

“Jeff Ingram (ERP’s park director) and Place of Grace Campus along with pastor Gary Richhardson were super helpful,” Denson explained. “They made sure the fields were ready to play on and ran the concession stand and made sure the lights and scoreboard were operated.

“Another tremendous bit of help came from Jeff Barrrington, who helped for the third year in a row with donating trophies for the champions,” he added.

Every couple of years, the league renames its tournament to honor someone who had contributed to its success in the past. This year’s tournament was named the “James Edward Barrington Memorial Tournament,” a tribute to Jeff Barrigton’s father who “helped us with the league for so many years.”

Following the two titles games, the league recognized individual players for their accomplishments. Lilesville was named the winner of the “team sportsmanship award.” Denson noted that two players from each team were selected to represent the “most improved player award” and the “best sportsmanship award.” 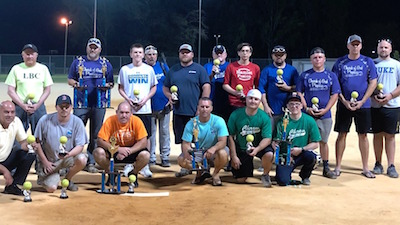 Winners of this season’s individual awards. Contributed by Brad Denson.

“This league is all about fellowship and bringing people together,” Denson said. “The best part for me is putting it all together and watching it unfold. We started meeting in late March and it’s been a fun couple of months.

“I started playing in the league in 1970 when I was 15 years old and I’ve met a lot of people over the years,” he concluded. “It’s always enjoyable to come out to the park and play watch teams have a good time.”