HICKORY, N.C. – While it didn’t reach its ultimate goal of winning the Tar Heel League baseball tournament just over a week ago, the Hamlet All Star 8U team accomplished a lot more, according to head coach Roger Stewart.

Noting that this is “the farthest” the team has ever made it in the annual state tournament, Stewart and his band of 13 players nabbed a third-place finish, falling to the Washington All Stars 11-3 in the semifinal game.

The tournament, which is a machine pitch league, hosted eight teams from across the state over four days from Thursday, July 26, through Sunday, July 29. The opening ceremony was held at L.P. Frans Stadium, home of the Hickory Crawdads minor league baseball team. The Hamlet All Stars played all of their games at nearby Lenoir-Rhyne University.

“It was such a great experience for this kids,” Stewart, a paramedic in Marlboro County and Hamlet, said. “This is the seventh year I’ve been involved with the Hamlet All Stars, and this is the farthest the team has ever made it. We went 3-2, and Hamlet baseball has really turned around — there is a lot of dedication from the coaches and players.

Stewart, whose son Rhyls Stewart is the team’s catcher, has been in the picture for the better part of the last decade, as he helped coach his oldest son, Tripp Stewart, a few years ago. He also noted this was the fifth year that the Hamlet crew has played in the Tar Heel League tournament.

Helped by assistant coaches Joey Guase, Kerick Hairston and Tripp Stewart, the Hamlet All Starts opened tournament play on Thursday, July 26, with a 9-3 loss to eventual champion Dare County. But after showing some opening round “jitters,” Hamlet was able to “settle in and play ball.”

Stewart explained that unlike the other seven teams, Hamlet was the only team to pull players from a city park and recreation department, whereas the others used a countywide player pool. 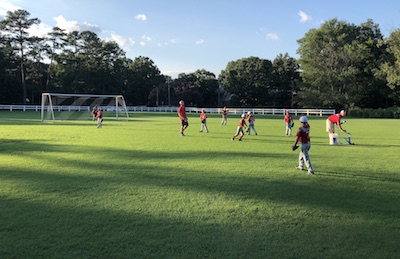 Hamlet All Stars warm up during the Tar Heel League baseball tournament.

Hamlet played two games on both Friday and Saturday, getting its three wins in consecutive fashion. In Friday’s action, Hamlet blew past Watauga County 11-4 in its first game, and followed up with a 12-4 victory over Parkwood.

The team’s most contested game was of the tournament was on Saturday afternoon, as Hamlet outlasted Burke County 12-11 thanks to a walkoff single by Jaxton Watson in the seventh inning. Stewart explained that the games run on an hour and a half time limit, but the Burke County game lasted two and a half hours — which didn’t leave his team much time to prepare for its next game against Washington.

“After the extra-innings game, we only had a 25 minute break before our next game,” Stewart said. “It was over 90 degrees, and our kids were battling so hard through the heat. But they came out flat (against Washington), and were just out of energy. I hate the way it ended, but they fought hard and we had an outstanding weekend.”

There were several highlights in the tournament, as Stewart explained that this team will be a “great group to watch over the next few years” as they come up through middle school baseball.

“Against Burke County, they had the bases loaded and one out,” Steward said. “Devin Morgan made an unassisted double play to get us out of the inning — he fielded a ground ball up the middle, stepped on second and threw to first to get the batter.

“We also had a lot of timely hits by all the players,” he continued. “In the Parkwood game, Drew Gause made a great play on the mound, throwing the ball to Rhyls (Stewart) at the plate to get an out. That was a big key moment to help hold them off for the win.”

But what Stewart is most proud of is how his 13 players fought hard on the diamond and never gave up despite being in some tight spots throughout the weekend.

“We wanted to win (the tournament),” the head coach said. “Of course we wanted to be the best in the state. But we also wanted the kids to have an experience they’ll never forget — and our boys did that. They fought hard and gave it their all.

“I think what they enjoyed is when they got down a couple of times in games, they really gelled together as a team to come back,” Steward added. “They were screaming and yelling in the dugout, and never quit — they learned to play as a team. This tournament was about them being able to look back in 20 years and remembering the moment.”

“I’d like to say a big thank you to Maurice McLaurin of Hamlet Parks and Rec and all of the parents for their dedication to us,” Stewart concluded. “Without them, we couldn’t have made this happen. They were all a big part of the deal.”