ROCKINGHAM — There was a lot on the line during Friday’s football game for the Richmond Raiders. The team’s 500th all-time win and a chance to earn a share of the 2019 Sandhills Athletic Conference were among the “to-dos” on the checklist.

But nothing was more important than honoring the 35 senior football players and nine senior cheerleaders.

In front of a full Raider Stadium, Richmond Senior High School principal Jim Butler read the names of all the players and cheerleaders. Each student-athlete was escorted by family members, and was accompanied by a RSHS teacher or faculty member.

Waiting at the end of the line was head coach Bryan Till, who took over the program when the class of 2020 was in its spring semester of freshman year. He met each player with a hug and some personal words of encouragement.

“Those guys work so hard to put us in this position,” Till said following Friday’s 45-6 win over Seventy-First High School. “They’ve won a lot of games at the JV and varsity levels to this point. They’ve got a lot of things on their minds they want to get done.

“They don’t get a lot of credit all the time because some of the guys are special teams or they’re getting in on the d-line or o-line,” he added. “They deserve that credit because they work so hard.”

After the football team filed through one player at a time, complete with a synopsis of career milestones, favorite memories and future plans, the Lady Raider cheerleaders followed suit. Greeting them at the end of the procession was head coach Meredith Hood, along with a gift from their fellow underclassmen teammates.

The cheerleaders also took the night’s festivities to a more serious degree, making signs and posters to honor those impacted by breast cancer. Junior cheerleader Macy Faw held a sign for her mother, Amy Faw, who battled breast cancer a couple years ago. Also, senior Gracie Allen, along with several other teammates, supported her mother, Crystal Norton, who is currently fighting the disease. 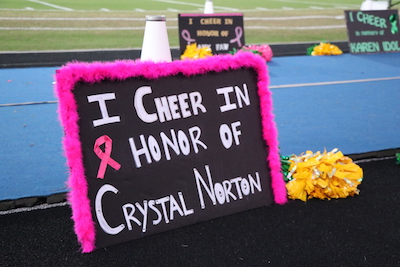