ROCKINGHAM — Paul McNeil, a sophomore basketball player, has been named the Official Richmond County Male Athlete of the Week presented by HWY 55.

Fighting for its first SAC championship since 2016-17, Richmond has two regular-season games left before the SAC tournament begins next week.

In three games last week, the Raiders defeated Union Pines, Southern Lee and Lee County high schools. McNeil was the team’s leading scorer in two of those games — against the Vikings and the Yellow Jackets.

Averaging 25.3 points per game and 10 rebounds per game during that stretch, McNeil used balanced scoring from the field and beyond the three-point line. He combined for nine triples, including a season-high six three-balls in an 84-59 win over Lee County.

McNeil opened the week with 28 points and 11 rebounds in a 60-54 victory against Union Pines. He netted 11 first-half points, added 12 in the third quarter and helped edge the Raiders to the win with five points in the fourth.

Making a breakaway jam in the first half, McNeil’s final two points came on a layup with 27 seconds left. That put Richmond up four points and teammate Javian Drake added two free throws to ice it.

Two nights later in a make-up game at Southern Lee, McNeil netted 19 points and added 6 rebounds in a 71-50 win. He scored six points in the first half and drilled three triples, a field goal and two free throws in the final two periods.

His 10 fourth-quarter points started with back-to-back threes from the top of the arc, followed by a jumper and two shots from the charity stripe.

Capping the week at Lee County, McNeil scored 29 points and recorded 13 boards. The Raiders netted a season-high 14 three-pointers as a team and McNeil had four in the first half and two after halftime.

He scored 14 points in the opening stanza, helping set the tone as the Raiders jumped out to a 25-11 lead. Seven more points in the second gave McNeil 21 points at the break.

Five points in the third and one last three-pointer in the fourth helped Richmond improve to 19-1 on the season. The Raiders are currently one game ahead Pinecrest for the conference lead with a 9-1 record.

Through 20 games this season, McNeil is averaging 23.6 points per game, which is tied with Heritage High School’s Justin Monden for the No. 1 spot in the 4A East, according to Maxpreps.

Richmond will close its regular season with two home games this week, starting with Lee County on Wednesday. Senior Night will be Friday against rival Scotland. 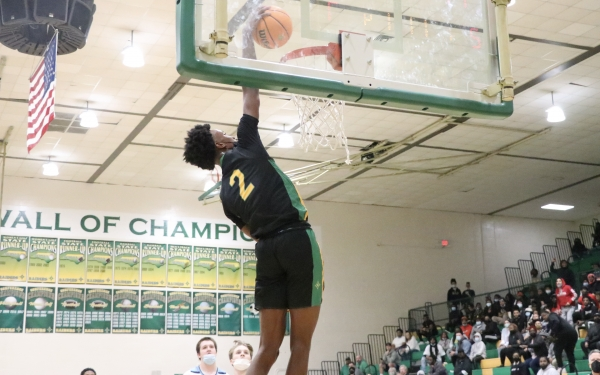 ROSports: The team earned three big conference wins last week. What was working for you in those games to allow you to average 25.3 PPG and 10 RPG?

McNeil: “I think what really helped us was being confident in our shots, and hitting them from the outside. That gets us going and when that happens, we’re hard to stop. We had good flow in all three games.

“My mid-range and outside shots were falling. And I was just hustling on rebounds, boxing out and using my athleticism and length to get rebounds. That all helps with my confidence.”

ROSports: How have you seen yourself and your game grow over the past 20 games? And how has the team matured and gotten better?

McNeil: “My ball handling has gotten better. And I think my communication with the guys has gotten better, too. I try to guide the guys to their spots and help us get wins. Communicating on offense and defense is a big part of our success.

“The team has grown a lot. In practice, we go hard every day on the things we do wrong. We’re getting better at them and Coach (Pettigrew) gets on us so we do the right things. That’s helping us try to get to states.”

ROSports: The playoffs are on the horizon. What’s the mindset of the team heading into the conference tournament and what will it take to earn a conference title?

McNeil: “No slow starts. We have to get out of the drop we’re in of slow starts and keep the confidence up in our games. We have to never back down, never have a lack of defense and always be on point.

“Our defense needs to get better. We can score the ball but that’s what will be the difference. We also need to continue to cut to the basket, work on our transition game and drive more to create chances at the free throw line.”

The Richmond Observer will publish its Official Richmond County Female Athlete of the Week on Tuesday.

© 2017- 2023 KCL Media, LLC All Rights Reserved Republishing is Strictly Prohibited Without Written Permission from the Publisher