Entering his second year as the varsity head coach, Donald “Bootsie” Pettigrew saw his squad go 2-1 on the day at the 13-team jamboree held at Southern Lee and neighboring SanLee Middle School. Richmond bookended its performance with wins over Rolesville and Overhills high schools, and lost nail-biter to Cardinal Gibbons High School in the middle game.

Pettigrew took a 12-man roster to the preseason jamboree, using a mixture of varsity and junior varsity players to work out the early season kinks. Not travelling with the team due to Richmond’s football season still going on were seniors AJ Isaac and DJ Stephenson, sophomore Caleb Hood and freshman Kellan Hood. Also not playing was senior Xavier Pettigrew, who is nursing a groin injury.

The Raiders opened the day in Southern Lee’s main gym, defeating Rolesville 31-23. Pettigrew noted that his team “started off slow,” before getting things together in the late going. All three games were played with four 10-minute quarters on a running clock.

“Defensively, we looked 10 times better than we did last season,” Pettigrew said following the final scrimmage of the day. “We started improving with our defense in February, and now they’re starting to get it. The guys are buying into things and are continuing to learn.”

In the second game, held in SanLee Middle School’s gym,  the Raiders held a lead over Cardinal Gibbons until the closing two minutes of the fourth quarter. Richmond jumped out to a 10-1 lead thanks to eight fast points by sophomore Nygie Stroman in the post. At the half, the Raiders held a 21-15 lead over the Crusaders thanks to a seven-point spurt by senior guard Alex Quick in the second quarter.

Out of the break, senior guard Rod Newton joined the scoring, as he drained three triples, but saw each of them answered by Cardinal Gibbons. The Crusaders closed the gap to just four points, 41-37 at the end of the third. Richmond was outscored 17-12 in the final 10 minutes, and the game closed on a Crusader drive in the paint that fell with under 10 seconds to go for a final score of 54-53.

“We’re going to be young this year,” Pettigrew said hinting that it could be a good thing. “We’ve got Patrick ‘PJ’ McLaughlin and Nygie Stroman, two sophomores who we expect big things out of. They’re continuing to get better, and PJ was moved up to varsity after the Powerade State Games this summer and is our starting point guard. Alex and Rod had good games, too, and will be big for us this year (as seniors).” 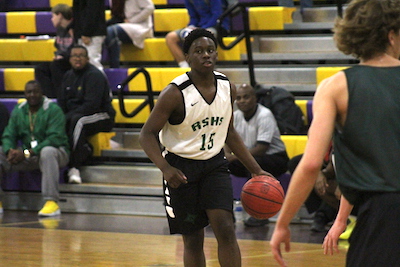 Sophomore Patrick McLaughlin is the team’s starting point guard heading into the season.

The Raiders rebounded from their only loss on the day with a 54-43 win over the Jaguars from Overhills in the final matchup. Junior center Jarvis Tillman had a solid performance, as the big man dropped a team-high 12 points, with Newton adding 11 more. Richmond trailed midway through the second quarter, 15-14, but a timeout proved to be the difference maker as a 5-0 run by Newton out of the break gave his team a lead it wouldn’t surrender.

Several Raiders got in on the scoring action, as Quick and Stroman added five and nine points, respectively. McLaughlin ran the floor well, while junior Quamir Sivels tacked on seven points. Tillman ended the game with a steal and a big two-handed jam in transition to secure the win in the final minute.

“Jarvis’ jumpshot has really improved over the summer, and Nygie is going to be something special,” Pettigrew said. “We really fed the ball well to the post today, and I told the guys we’re going to work from the inside out this year. Nygie and Jarvis will be a big part of that, and Rod shot well from the three-point line. We’ve just improved so much from last year.”

The Raiders will travel to Cheraw High School (Cheraw, S.C.) for their final preseason scrimmage on Thursday. ROSpors will publish a complete season preview later this week.