HAMLET — Upgrades have been made to the Hamlet American Legion Post 49 baseball program, both on and off the field, that head coach Chip Gordon believes will lead to a successful summer campaign.

Back for its second season after a 14-year hiatus, Post 49 is looking to build off a 3-13 overall record last summer.

“It’s a new year with a new team, and we’re really excited to have this group of guys together this summer,” Gordon said. “There are a couple guys back from last year and some new faces. We think we have a team that can compete this year.

“Last year, we knew we’d take our lumps as a first-year program,” he added. “We grew a lot as coaches and players, and I think it’ll make us a stronger team this year. We’re going to pitch, play defense, hit and play the game the way it should be played.”

The team held its first week of practices last week, and had a team cookout on Sunday to kick off the new season.

Part of Area 2, Hamlet will compete in a seven-team conference with hopes of qualifying for the state tournament in July.

Post 49 has a roster of 16 players, representing six high schools from North and South Carolina.

Seven players are returning this summer including Ra’Nes and Ra’Nik Little, who both play at Cleveland Community College. Also back are Kole Dutton and Dexter Jones (Anson), Ayden Allen and Jake Clemmons (Marlboro Academy) and Cooper Sessoms (Richmond). A big believer in team chemistry, Gordon said this year’s group has shown promise and cohesion during early practices. He also stressed that the best starting nine players will be put into the lineup each game, giving Post 49 its best opportunity to win.

One aspect of its game that Hamlet is working to improve from last season is its pitching. Gordon said there are roughly seven players he expects to see carry the weight in different roles this summer.

“There are a lot of guys we believe we can put on the mound and get the job done at any one time,” Gordon explained. “Tanner (Cheek) and Chaz (Whitmore) will see a lot of innings for us, and both Ra’Nes and Ra’Nik have gotten a lot better pitching at Cleveland.

“Other guys like Cameron (Way), Michael (Norris) and Tristan (Hunt) will round out our pitching,” he added. “We preach pitching to contact and filling up the strike zone. We’ll be in a lot of games if we do that, and we will also use pitchers situationally throughout the season.” Depending on who’s pitching, Gordon expects Hunt and Way to secure the middle infield positions, and Norris to play third when he’s not on the mound. Clemmons and Cheek will play first base and rotate depending on whose “bat is getting the job done.”

Behind the plate, Sessoms and Williams will serve as battery mates to the pitching staff. Both Littles played a lot of outfield in center and right field last summer, and Gordon said the team is working out left fielders to find the best fit.

“Our defense is strong up the middle, on the corners and behind the plate,” Gordon said. “We want to keep the running game in check this year, and with those two arms behind the plate and our pitchers working on pickoffs, we should be able to do that.

“Where we need to get stronger is the outfield,” he added. “Ra’Nik and Ra’Nes can cover a lot of ground, but we need to solidify left field. Kole (Dutton) is doing a great job there right now.” Behind sound pitching and making routine plays in the field, Gordon believes Post 49’s offense will come together on its own.

“I can tell we’re already swinging the bat a lot better this year,” Gordon noted. “With the type of speed we have in our lineup, we should be able to do a lot more offensively.

“There are guys who will consistently get on base, and others who can hit it in the gap and move runners around. We’re going to be aggressive, try to stretch singles into doubles and I don’t see a hole in our lineup.”

Gordon explained that Hamlet’s expectations this season include contending for the top half of the conference standings, considering he’s not entirely sure what level of talent the other programs have.

“We can compete if we play the way I know we can,” he closed. “If we have the mindset of winning each game, we can finish near the top of the conference. The guys just have to control what they can control to give us a shot at finishing as one of the top two teams and qualify for the state tournament.”

Post 49 will start its season with a non-conference doubleheader on Saturday against Concord Post 51 (4:30 p.m.) and Mocksville Post 174 (7 p.m.). The games will be played at Mando Park at Rich Field in Mocksville.

Historic Memorial Park in Hamlet has undergone several offseason renovations to prepare for the new season.

The entire stadium, including the grandstand, dugouts and fences, has been painted navy blue, replacing the previous dark green.

New lightbulbs have been put in the stadium lights, and a new 16×8-foot Nevco scoreboard is expected to be installed this week.

Gordon said the program has also incorporated six tons of Turface to soften up the infield. Other additions include a portable hitting cage, two new bullpens, new dugout features for players and completely renovated restrooms. 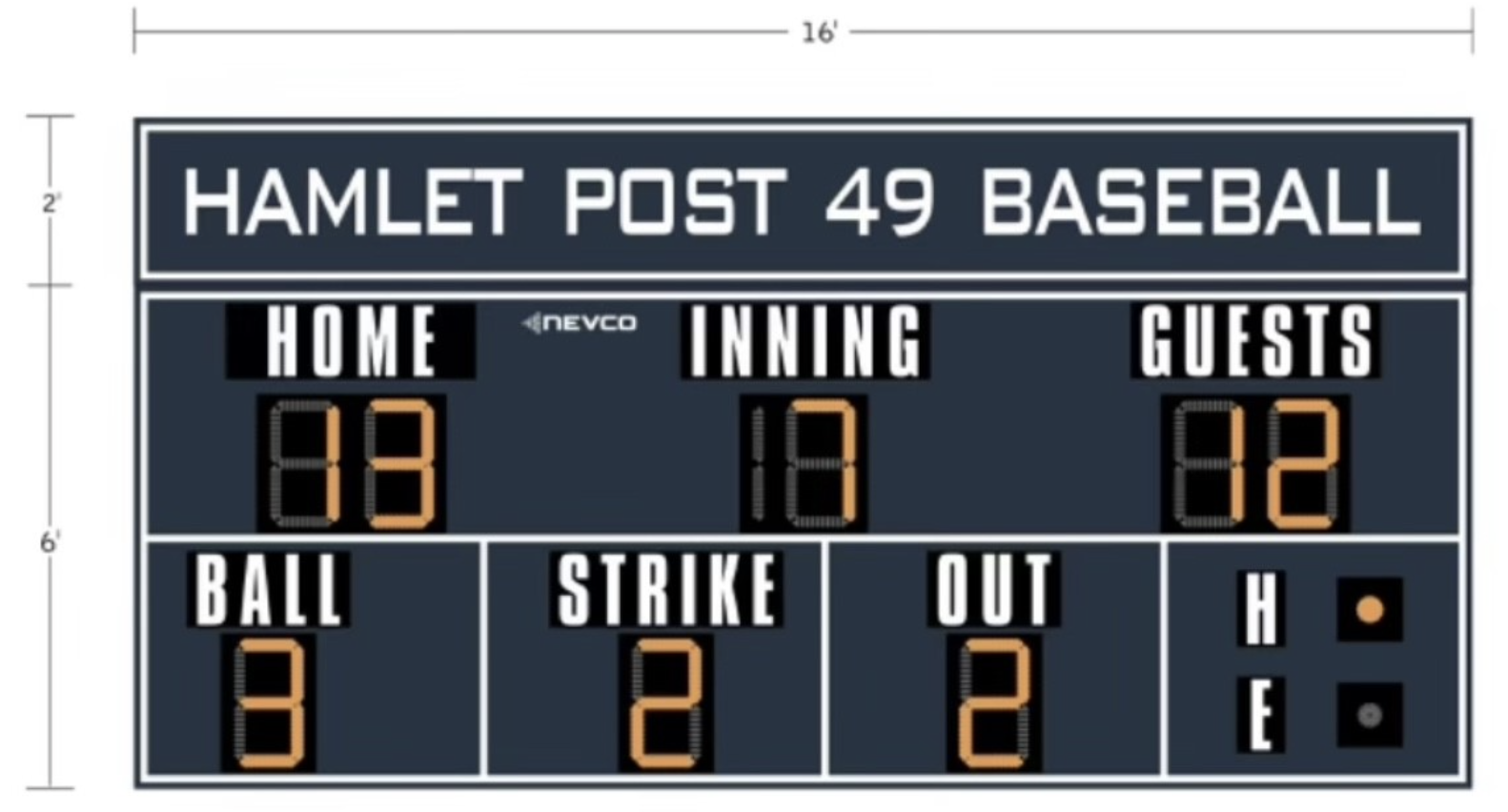 A mockup of the new Nevco scoreboard at Memorial Park in Hamlet. (Contributed photo) 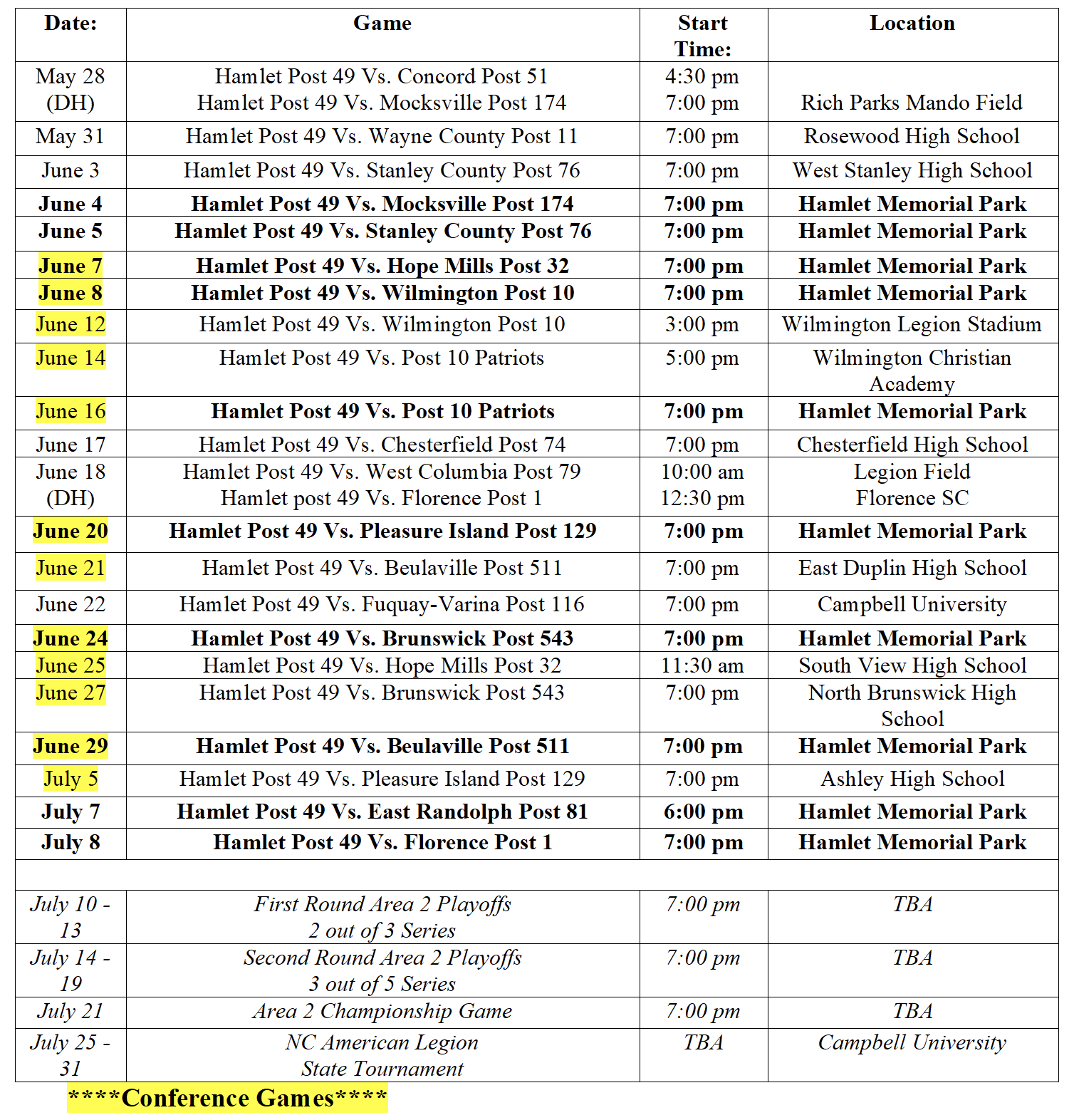 Jackson appointed to RichmondCC’s Board of Trustees