GREENSBORO — An impressive spring season by the Richmond Senior High School boys’ track and field team came to a close on Saturday.

Qualifying for a chance at a state title in last week’s regional meet, seniors Cason Douglas, Kelay Lindsey, Jaylen McDonald, Javares Stanback and junior Taye Spencer put their speed and athleticism to the test against other top competitors in the state.

“It was a hot, crazy day,” head coach Reggie Miller said. “The guys were hydrated all day and I thought they all did a tremendous job. I’m really proud of them.

“Overall, they bought into what we were trying to do this season. And that was to come in, work hard and get their workouts in. I always tell them they can’t have a million dollar dream with a minimum wage work ethic.”

Richmond’s best finish of the day came from Stanback in the high jump. A week after setting a new personal record and winning a regional championship, Stanback placed fifth overall. He cleared the bar at 6 feet, 4 inches, two inches shy of the state title.

That height put him in a five-way tie for second place, sending Stanback and the four others to a jump-off. Starting at 6 feet, 2 inches, Stanback cleared it on his third attempt, while the others made it on two attempts, giving him fifth place.

Competing in track and field events for the first time as a senior, Stanback was also named the Sandhills Athletic Conference’s boys’ “Player of the Year.”

“I feel like I worked really hard for this,” Stanback said of his final placement. “I believe that if you work hard, your dreams can come true. And I definitely put in a lot of work this season.

“It was a big surprise to be named the conference Player of the Year,” he added. “I didn’t think I was going to get it. The best part of this season was just seeing all of my accomplishments come true and doing it against really tough competition.” 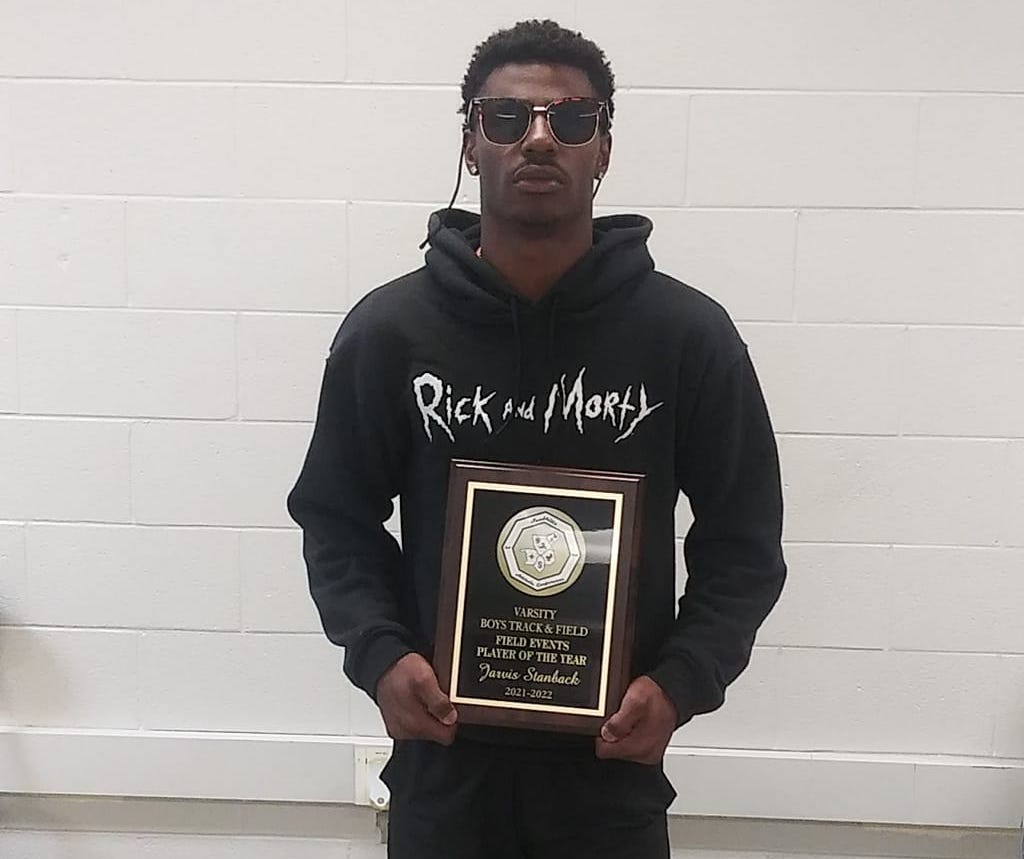 Like Stanback, the Raiders’ 4×100-meter relay team was coming off a regional championship. McDonald, Lindsey, Spencer and Douglas capped their first season together as a team with a sixth-place finish.

The Raiders passed the baton around the track in a time of 42.36 seconds, which according to Miller, was the fastest time this season by the team.

Richmond was 0.35 seconds behind fourth-place Mallard Creek High School (42.01 seconds), which would have landed an All-State recognition. Taking the state title was Cuthbertson High School with a mark of 41.57 seconds.

“The high jump went down to the wire and it was very interesting watching that event,” Miller said. “Javares did a tremendous job, especially after starting the season as just a sprinter.

“The relay team was in lane seven and ran their best time of the year in the championship heat,” he added. “It was a tight race and they did outstanding. All the handoffs were good, just the other teams got to the finish line first.”

Miller noted that he was impressed with all five athletes’ work ethic and determination to get stronger and faster this spring.