It’s the second time this winter both players have been named, and it’s Stroman’s third overall selection (named once as a sophomore).

As the boys’ and girls’ basketball teams’ season winds down and begins the Sandhills Athletic Conference tournament on Monday, Love and Stroman are coming off electric performances in Richmond’s final three regular season games last week. 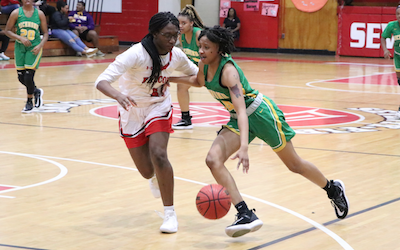 To start, she notched a career-high 25 points in a 60-41 win over second-place Seventy-First High School on Tuesday. That win was Richmond’s first victory over Seventy-First since Feb. 2009.

Love put up 14 points a night later at Lumberton High School to add to junior teammate Jayla McDougald’s career-high 25 points. Richmond completed the regular-season sweep of the Lady Pirates as a result of a 57-41 win.

Capping her week with senior night on Friday at home, Love again led the Lady Raiders in scoring with 24 points. The 33-point win helped Richmond secure a fifth-place finish in the SAC standings.

Love and the No. 5 Lady Raiders will take on No. 4 Pinecrest High School in the opening round of the SAC tournament on Monday. 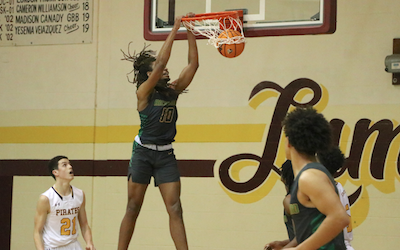 The Raiders also played three games last week, earning wins in two of the three, making it four wins in the last five SAC contests for Richmond. Stroman was a contributor in the first two games against Seventy-First and Lumberton, netting seven and nine points respectively.

But he returned to his early-season form with a spectacular 26-point game against rival Scotland on senior night. Just one point shy of tying his career-high, Stroman set the tone against the Fighting Scots to help deliver a 67-62 win in the regular-season finale.

Netting 17 points in the second half, including 10 points in the third quarter, Stroman also netted seven of his nine free throw attempts. His big second half was crucial to holding off a late run by the Scots, as Stroman and teammate Caleb Hood combined to secure the win.

The victory over the Fighting Scots redeemed a loss the first time the two teams played and secured Richmond’s finish in third place in the SAC standings.

Now Stroman and the Raiders will use Monday as a practice day to get geared up for the SAC tournament, which will see No. 3 Richmond host No. 6 Purnell Swett at 6 p.m. on Tuesday. ROSports will publish a preview in Tuesday’s edition.

Richmond County Sheriff’s Office: Stay off the roads during storm