ROCKINGHAM — For the first time in its five-year history, the Official Richmond County Male Athlete of the Week, presented by HWY 55, is going to a group of Raider student-athletes.

“REGIONAL CHAMPIONS” WITH THE 4×100 RELAY TEAM

With nearly 25 teams from around the region competing in events, Richmond’s 4×100-relay team won the regional championship.

The Raiders impressed with a time of 42.71 seconds, which was the fastest time out of the 14 qualifying teams.

Richmond’s running order is McDonald off the blocks, then onto Lindsey and Spencer, before Douglas anchors the final 100 meters.

The Mideast regional time secured Richmond’s spot to compete for a state title in the event. The team’s fastest time this spring has been 42.30 seconds.

Douglas, McDonald and Spencer also competed in the open 100-meter dash, and Douglas punched his ticket to states with a fourth-place finish (10.95 seconds).

Senior Javares Stanback, an alternate for the 4×100 team, was named the regional champion in the high jump following a new personal record of 6 feet, 6 inches.

The Raiders will now prepare for the NCHSAA 4A state championship meet, which will be held at North Carolina A&T State University on Saturday. 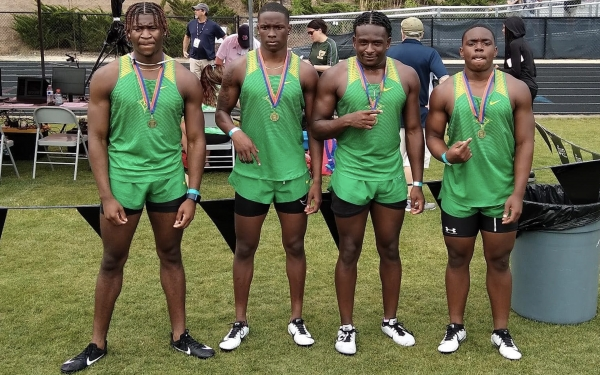 RAPID RESPONSES WITH THE 4×100 RELAY TEAM

ROSports: As the anchor on the team, what is your responsibility and what do you focus on most while running the final leg?

Douglas: “My job is to finish the race strong and finish really fast. I also have to make sure we get a good spot and time as a team. All I think about is to run as fast as I can and win the race.”

ROSports: What makes this relay team so impressive and what is the chemistry like between you and the other runners?

Lindsey: “We’re a brotherhood and we’ve played football together for three or four years, and that carried over into track. Everyone clicks out here and we know what we have to do. We’re smooth when it’s time to race.”

ROSports: How do you make sure to get a fast start off the blocks and what’s the most challenging part of running the relay?

McDonald: “I just try to set the tone for the rest of the guys and I hope that they see I’ve given the team a good start and get a lead. Last week’s race was good and we were really fast. The most challenging part is staying on the same page and making clean handoffs.”

ROSports: What’s it like being the only junior on such a competitive relay team and what are the team’s hopes for Saturday’s meet?

Spencer: “Being the only junior makes me feel like a dog, and I try to keep up with Cason since he’s so fast. Our team chemistry helps us click and we’re continuing to work hard. We’re doing intervals and working on handoffs and we’re excited to run at states.”