ABERDEEN — For the first time in the program’s five-year history, the Richmond Senior High School girls’ bowling team swept the competition at the Sandhills Athletic Conference championship meet on Tuesday.

The No. 3 Lady Raiders won their first SAC championship as a team, defeating rival No. 1 Scotland High School in the process.

With its performance, Richmond also qualified for the state championship team tournament for the first time since the program started in 2017.

Three junior bowlers — Thompson, Molly Erwin and Addison Massey — also qualified for the state championship individual tournament by placing in the top 10 of the standings. That also earned them All-SAC status.

“The girls dominated all day from the beginning,” head coach Ralph Butler said. “Honestly, if it were the top 15 qualifying for the state then we might have sent everyone. I’m extremely proud of them.

“I figured a pin total near 400 would get them in and we had so many near that number,” he added of the individual tournament. “Addison finished 10th with a 391, Molly finished 7th with a 397 and Cadence finished 2nd with a 468. That’s the highest pin total for the girls individuals for Richmond since I’ve been coaching.”

In her individual games, Thompson rolled scores of 158, 157 and 153. Since she finished in the top four, she went to a single-elimination bowl-off to determine the conference champion.

Thompson defeated Angelle Norton (Scotland) 144-133 in the semis. She had two strikes and four spares in that win. Thompson followed that by upsetting Vierwinden, “Pinecrest’s ace,” by a total of 158-135.

Helping her secure the individual title were three consecutive strikes in the seventh through ninth frames. Spares in the third and 10th frames also helped her edge the Lady Patriot.

“It feels good to be the SAC champion,” Thompson explained. “I was doing really well in practice and then when we bowled our three single games, I just stayed consistent.

“In the final round, I had not been doing as good as I was doing earlier, but then (Vierwinden) got her first strike of the round and everyone was cheering. So then I bowled next and got a strike and used it as motivation to keep the streak going.”

Butler noted that Thompson “was consistent all day and it continued in the roll-off.” 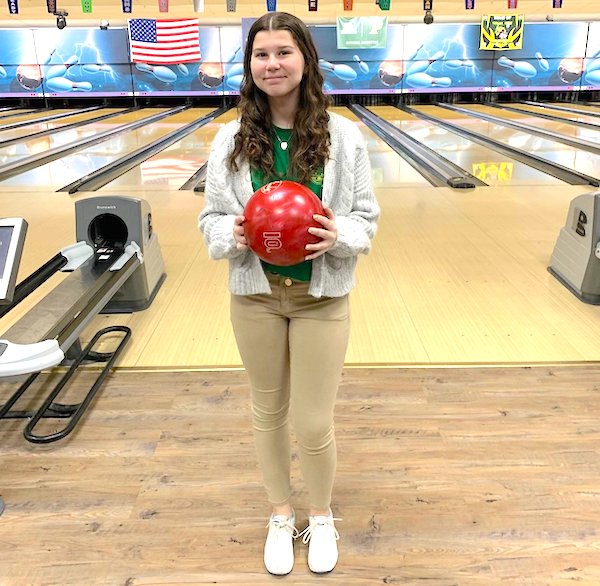 When the Lady Raiders defeated Scotland in Monday’s regular-season finale, it moved them into the No. 3 seed of the team tournament. That allowed them to bowl against Southern Lee High School in the first round, which was a forfeit win for Richmond.

In the semis, which was also single-elimination style, the Lady Raiders upset No. 2 Hoke County High School. The Lady Raiders defeated the Lady Bucks 122-93, led by one strike from freshman Ava Thompson.

Junior Ashlyn Bouldin, Erwin and Cadence Thompson each collected one spare in the 29-pin win over Hoke County.

That set the Lady Raiders up with a third meeting of the season with Scotland in the championship, whose only two previous losses came to Richmond.

Completing the season sweep of the Lady Scots, Richmond clinched the SAC title with a final score of 141-110. Bouldin (two strikes) and Erwin (strike, spare) closed both of their respective frames.

Cadence Thompson had a spare in the 10th frame, allowing her to roll again. She added eight more pins to the final score.

“I think to win as a team and to qualify for states is a big deal for our team,” Cadence Thompson said. “I don’t really think anybody was expecting us to do as good as we did, but during singles everyone on the team bowled really high games and was warmed up for teams.

“We all wanted to go to states as a team and not just for singles, so we used that as motivation to beat Scotland in the final round.”

The state championship match for singles and the team will be held Friday at Planet Fun in Shallotte, N.C.

“They once again rose to the challenge to defeat a strong Scotland team who played outstanding all year long,” Butler said. “Scotland has a great coach and a really good program, so to be able to edge them this year during the regular season matches and beat them in the conference finals was huge for the girls.

“Hopefully they can carry this momentum into the state tournament. This is the first appearance for the Richmond girls team since bowling began. They should be very proud.”

Note: The Richmond boys’ bowling team will compete in the SAC singles and team championships in Aberdeen on Thursday.